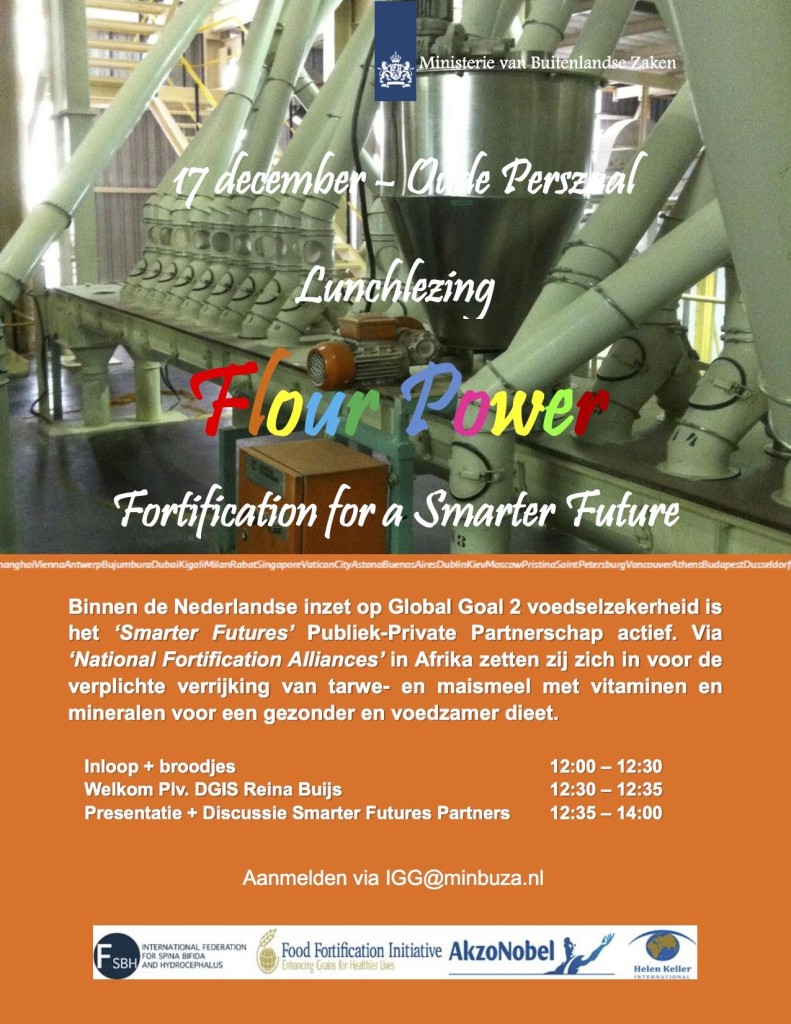 Opening the seminar, Reina Buys, Deputy Director General, International Cooperation reminded the audience that in 2007 the Schokland agreements were drafted, specifying the Dutch support for the Millennium Development Goals involving private as well as public partners. Smarter Futures was one of these innovative new partnerships including public and private partners, but also knowledge institutions and civil society actors. In fact, Smarter Futures built a Dutch Diamond Approach even before the Government started advertising it!

Reina explained that the Smarter Futures partnership is dedicated to combat malnutrition in Africa, predominantly focusing on women of childbearing age, adolescents and children. One of their focal points is the prevention of spina bifida (open back) among children. A cause for this birth defect is a lack of folic acid before and during pregnancy. Through their flour fortification programme they are increasing the nutritional value of diets, by adding folic acid amongst other minerals and vitamins, making healthier food available. Another important mineral added is iron, essential for brain development of children already during pregnancy.

And so far, Smarter Futures has been successful in their approach. To illustrate; in 2004 only two countries in Africa fortified their flour. Now, in 2015, there is mandatory legislation for fortification of at least wheat-flour in 26 countries while millers in 3 additional countries fortify their flour voluntarily.

Under the guidance of Marcel Beukeboom, Head Inclusive Green Growth department, Food and Nutrition Security at the Ministry, the Smarter Futures Partners presented the work of their partnership, the rationale for fortification with iron and folic acid, the impact of fortification in countries after fortification started as well as the successes achieved and the challenges still remaining.

Anna Verster, Smarter Futures Project Coordinator introduced the partners and the set-up of the Partnership and explained how Smarter Futures works, what it does and also what it doesn’t. She emphasized that Smarter Futures does not itself invest in large programme resources but supports and strengthens the efforts of FFI’s network partners, e.g. the Global Alliance for Improved Nutrition (GAIN), World Health Organization (WHO), the World Bank, UNICEF, USAID, the Micronutrient Initiative (MI) and others. Smarter Futures brings in technical expertise, has developed training tools and offers training to all members of National Flour Fortification Alliances. At the country level, food fortification programmes require collaboration and interaction between the private, civic and public sectors to ensure successful implementation and effective nutritional outcomes A unique feature hereby is that Smarter Futures can bring people together across sectors and across countries. Many donors can only support individual countries.

Quentin Johnson, FFI Technical Coordinator, gave a presentation on behalf of Juliana Ruparelia of AkzoNobel, introducing the company briefly and describing the work done by AkzoNobel in developing a highly bioavailable iron compound that has been recommended by WHO for use in both low and high extraction maize and wheat flours and where low consumption of flour is a problem. The presentation also showed the important work done on ensuring regulatory status for this iron compound.

Lieven Bauwens, Secretary General of the International Federation for Spina Bifida and Hydrocephalus, IF presented the Faces of Spina Bifida, showing what causes spina bifida and hydrocephalus and how this is just the tip of an iceberg that includes other health outcomes. IF is committed to prevention of these neural tube defects (NTD’s) but also focuses on the perception of spina bifida and improving the life of those affected and their families. Finally, Lieven emphasized that termination is not prevention and that Europe has been shown to lag far behind in prevention of NTD’s.

Anna Verster then informed the audience that 25 years ago it was discovered that Folic Acid can Reduce the Risk of neural tube defects such as Spina Bifida by as much as 70 % if taken daily form at least 8 weeks before conception till 12 weeks into the pregnancy. Anna then showed how difficult it is to obtain enough folic acid from the diet or to take supplements early enough to reduce the risk of NTD’s. Worldwide, fortification of flour has been shown to be an effective means to reduce NTD’s and 84 countries now fortify their flour with at least folic acid, on average reducing these birth defects by half. In Europe no change has been seen over 15 years!

Having built the case for fortification of flour with at least iron and folic acid, the team then proceeded to show what has been achieved and which challenges remain.

Fred Grant, Regional Nutrition Adviser, Helen Keller International (HKI), showed the success story of fortification in West Africa, where currently most countries have mandatory fortification for wheat flour and vegetable oil. Fred described the process that has led to these successes, i.e. population-based identification of food vehicles, Industry assessments, building the legal framework, production, quality assurance, public awareness raising on fortification, private marketing of fortified foods as well as monitoring and evaluation. For all of these elements, partnerships and advocacy are essential. In West Africa fortification standards are being harmonized and one logo is used regionally.

Finally, Ronald Afidra, FFI Africa Network Coordinator presented an Assessment of the Achievements from 2011 till 2015 and the challenges remaining. Ideally, over 75% of industrially milled grain in a country is fortified, iron and folic acid are included as appropriate for targeted population and the recommended type of iron is included for consumption levels. Also, in many countries, not only wheat flour but also maize flour is consumed, as well as rice.

FFI monitors progress in countries and has developed colour coded maps to allow for easy understanding of the situation. Ronald used colour coded maps to show the progress over time and the number of countries now having achieved the desired stage. The next steps will now be to strengthen public sector capacity for QA/QC and nutrients monitoring, to continue to rain millers for self regulation and internal compliance, to continue to advocate for countries to align standards to World Health Organization recommendations to expand Smarter Futures’ focus to industrially milled maize and rice and above all, to continue to collaborate with partners as they are the key to success!

After these presentations that can all be viewed online by clicking on the links, a lively discussion ensued, that touched on issues like, what needs to be done to address the demand side for fortification, how do we fortify flour at small mills from a technical and an economical point of view. Smarter Futures is planning a Maize Fortification meeting in 2016, where the fortification at large and medium size commercial maize mills will be addressed. Small scale village mill fortification has been tried by many NGO’s but remains non-viable. The importance of including fortification in curriculum development was also raised. Replying to a question about adding Vitamin C in flour the team informed that this vitamin does not survive the high temperatures during baking. Also, emphasis was put on the important role of civil society. Finally several speakers highlighted the need for strong arguments to convince Europe to fortify flour with at least folic acid. In the United Kingdom alone, an estimated 2014 NTDs could have been prevented from 1991 to 2012 if flour had been fortified with folic acid.

Smarter Futures will soon post its work plan for 2016 to www.smarterfutures.net to enable partners and interested parties to join and support its activities. Also, the training tools and reports of all meetings and workshops are available on this website.