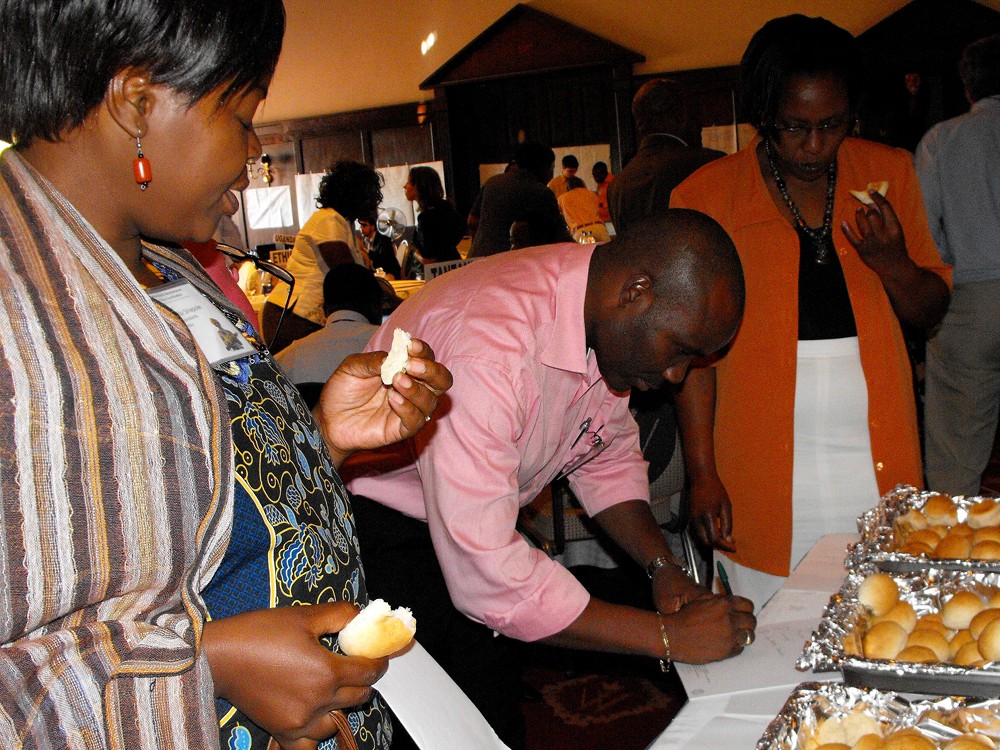 Download the agenda, the concept note, as well as the summary from the workshop.

The importance of using the latest scientific data available for flour fortification – and contributing to the evolving evidence – became the focal point of a Harmonisation Workshop 19-22 April 2010 in Nairobi, Kenya. More than 100 people representing 15 African counties attended the workshop which was designed to help countries harmonize the World Health Organization (WHO) “Recommendations on Wheat and Maize Flour Fortification Meeting Report: Interim Consensus Statement” with their food consumption patterns, local milling infrastructure, and contextual realities such as whether other staple foods are effectively fortified. The workshop was organized by the Flour Fortification Initiative with support from Smarter Futures (a partnership with the Ministry of Foreign Affairs of The Netherlands); the United Nations Children’s Fund (UNICEF); the East, Central and Southern Africa Health Community (ECSA); Micronutrient Initiative (MI); Helen Keller International (HKI); World Bank, and World Food Programme.

The meeting began with reminders of the devastating effect of vitamin and mineral deficiencies. In the host country of Kenya, “statistics reveal a grim picture,” noted Ibrahim Amira, Deputy Director of Medical Services for Public Health and Sanitation, in a speech he presented on behalf of Shahnaaz Sharif, Kenya Director of Public Health and Sanitation. The vitamin A deficiency rate among children younger than 5 years is 76%, and iron deficiency affects 55% of pregnant women, he said. Vitamin and mineral deficiencies are present throughout the region, [1] and food fortification was presented as a strategy that can contribute significantly to optimizing maternal nutrition and young infant health.

In several Eastern, Central and Southern African countries, ECSA guidelines [2] are typically used to guide fortification of flour, oil, salt, and sugar. ECSA, which has direct links to regional health policy makers, based its guidelines on past recommendations from the WHO. However, the WHO released new guidelines for fortifying wheat flour in 2009. [3] During the workshop, ECSA encouraged countries to adapt the WHO recommendations as the latest available science for fortifying wheat flour with iron, folic acid, zinc, vitamin A, and vitamin B 12. [4] While flour is commonly fortified with other nutrients, these are the essential vitamins and minerals included in the 2009 WHO guidelines.

Many countries find it more economical and more practical to add vitamin A to edible oils than to wheat flour. Countries in West Africa are taking the lead in passing legislation to fortify flour with iron and folic acid and vegetable oil with vitamin A. Workshop participants were encouraged to consider this model, and to look at the West African example for managing imports and exports in areas where flour and oil are regularly traded.

The 2009 WHO guidelines apply to both wheat and maize flours for folic acid, vitamin A, and vitamin B12. The WHO guidelines apply to fortifying wheat flour with iron and zinc, but some uncertainty remains on appropriate levels for fortifying maize with iron and zinc. Several African countries are fortifying maize, and they were encouraged to systematically monitor their programs and contribute the information learned to the evolving evidence on maize flour fortification. One avenue for contributing to the on-going science is to reply to the WHO “Call for Public Comments” which seeks information for developing evidence-based policy and programme guidance for nutrition and health development.

FFI and Smarter Futures are addressing this gap in information related to organoleptic effects by conducting cooking and baking trials in preparation for various meetings. Before this workshop, trials were conducted in South Africa and Tanzania using wheat and maize flours fortified at levels recommended in the WHO guidelines. Additional trials are being conducted in Kenya. Preliminary results from the trials showed no significant changes in the food’s sensory qualities. Foods prepared were bread and chapatti using wheat flour and porridge and ugali or posho using maize flour. While some slight differences were noted, all were deemed acceptable. The full report will be made available as soon as finalized.

During the workshop, dinner rolls were baked with wheat flour that had been fortified with iron, zinc, folic acid, and vitamin B12. Five pans of rolls were prepared; three with different kinds of iron and two with no fortificants to serve as control groups. Participants were challenged to find the differences in the rolls, but despite careful observations, only minimal differences were reported, and a few people said they liked the control group made with unfortified flour the least. [5]

Baking trials with wheat flour products were also done in East Asia in 2009 before a similar workshop in the Philippines. They likewise revealed that fortification caused only minimal sensory differences in commonly eaten foods such as various kinds of noodles. [6] These sensory trials, which used similar methodologies, contribute important new evidence on the feasibility and the acceptability of fortifying flours in accordance with the WHO guidelines. A review of 10 other studies on the organoleptic effects of flour fortification is available on the FFI website.

In addition to paying attention to the effect of fortification on food properties, countries developing fortification plans should consider daily per capita flour consumption as noted in the WHO guidelines. Determining that figure can be challenging because a source of data is not always obvious. Five sources noted in the workshop are national food consumption data, household income and expenditure surveys which include information on staple foods, panel surveys, Fortification Rapid Assessment Tools (FRAT), and food balance sheets from the Food and Agriculture Organization. [7] Each source has limitations, but each represents an adequate option for gathering information. ECSA also offers a tool to be used for calculating flour consumption. [8]

Cost considerations are often cited as a hindrance to fortification. A panel of millers and another panel of premix suppliers addressed concerns related to the economics of fortification. In addition, the Global Alliance for Improved Nutrition (GAIN) presented information on its new service known as the GAIN premix facility. [9] Since launching in July 2009, the GAIN premix facility has delivered 32 premix orders, helping customers in 10 countries in Africa, Central Asia and Eastern Europe access affordable, quality certified vitamins and minerals. The value of orders is expected to reach US$4 million in value in the first full year of operation – it is estimated that once utilized, this premix will deliver essential micronutrients to approximately 60 million consumers in developing countries.

One afternoon session featured two breakout sessions. One session addressed quality assurance and control performed by mills and government authorities. [12] The second session was on the importance of monitoring the health impacts of programs. Both aspects – ensuring product quality and monitoring for effectiveness – are essential for fortification to maximize its potential for reducing the negative health consequences of vitamin and mineral deficiencies. Throughout the workshop, groups worked in country teams to apply the information being presented to their own situation. Each group developed a 100-day plan of action [13] to outline next steps for moving forward with flour fortification. After the workshop, partners working in Africa met to discuss how to support and facilitate the countries’ action plans. For many participants, this workshop was a follow-up to a 2008 advocacy meeting in Arusha, Tanzania. During that meeting, the group’s consensus statement was “Yes We Can!” Participants at the Harmonisation Workshop ending this meeting by declaring: “Yes We Will!” [14]

1. Overview of Micronutrient Issues And Action In The Eastern And Southern Africa Region

2. Flour fortification in the ECSA region and an overview of ECSA standards

3. Introduction to WHO Recommendations on Wheat and Maize Flour Fortification 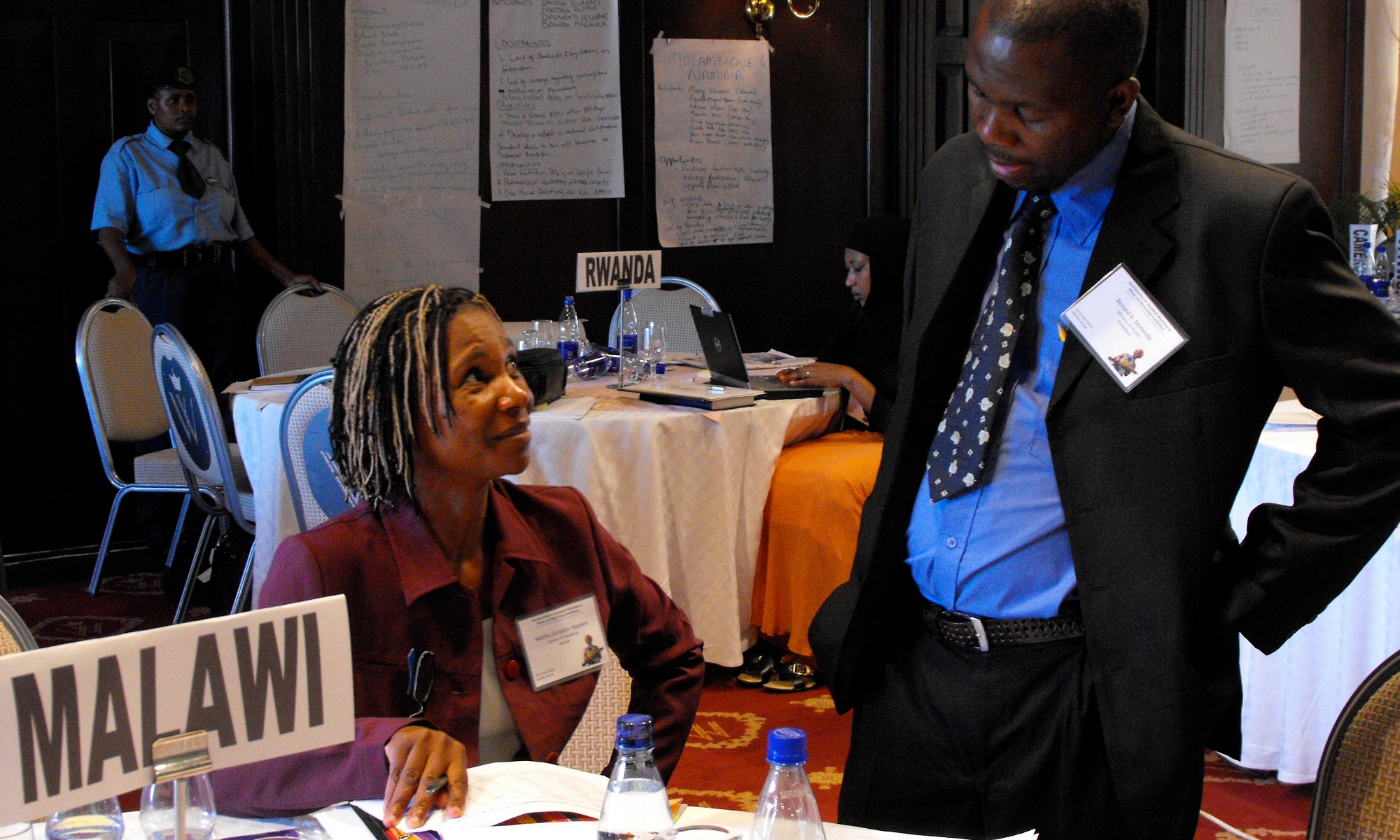